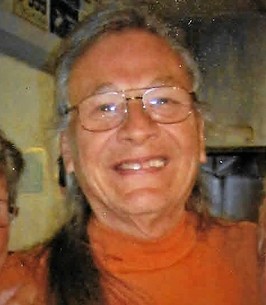 Robert Harold Bailey – Age 84 of Farwell passed away at The Laurels of Mt. Pleasant on Thursday, January 13, 2022. Robert (Bob) was born to parents Lahy and Gladys E. (Strong) Bailey in Mt. Pleasant, MI on June 14, 1937. He was a member of the Mt. Pleasant Saginaw Chippewa Indian Tribe. Bob joined the US Air Force and proudly served his country. He married the love of his life, Norma Jean Robison, at the Justice of the Peace in Farwell, MI on leap year, February 29th, 1968. They moved to Farwell from the Flint (Montrose) area 21 years ago. Bob was a member of the Moose Lodge and the American Legion. He enjoyed fishing and was an avid outdoorsman. He also played guitar in a country music band called Southwind for many years.
Bob is survived by his loving wife of 54 years, Norma Jean Bailey, his stepson, Tom W. Bailey, Jr., grandchildren Gage and Damon, and great grandchildren Gage, McKala, and Jaydon, as well as siblings Bud Robison of Farwell, Dusty Robison of Clare, Judy Bannister of Mt. Pleasant, Janet Kerns of Kent, WA., Romana Walker of Flushing, Elli VanHorn of Mt. Pleasant, Lynn (Lynden) Arnold of Coleman, Sandra Wilson of Farwell, and Marcia (Dewey) Dickinson of Clare, a sister in law, Arlene Robison of Farwell, as well as many nieces and nephews.
He was preceded in death by his parents, Lahy and Gladys Bailey, and brothers Michael Robison, Frederick Bailey and Buddy Bailey, and sister Terri Huntoon.
A funeral service will be held at Campbell Stocking Funeral Home in Farwell, MI on Tuesday, January 18, 2022, at 1:00 PM. Visitation will be held from 10:30 AM until the time of service at 1:00. Pastor Ray Francis of the United Methodist Church of Farwell will officiate. Bob will be laid to rest at Surrey Township Cemetery. Memorial considerations may be made to St. Jude’s Children’s Research Hospital in Bob’s name. Envelopes will be made available at the funeral home. Please share your memories and condolences online with his family at www.CampbellStocking.com. Arrangements have been entrusted to the Campbell Stocking Funeral Home, Farwell, MI.