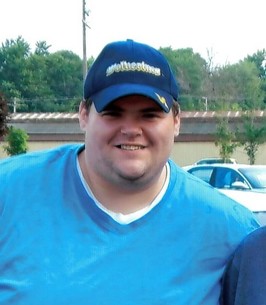 Michael Lee Acre II age 40 of Farwell, MI went home to the Lord on November 5, 2021. Mikey was born on March 10, 1981, to parents Michael Lee Acre and Sally Pence Acre. He was a graduate of Marine City High School, class of 1999, and a Baker College graduate of 2010. He worked as a Sales Manager at Staples in Midland and was so proud of working up to this role in the company. He had many hobbies and collections over the years. He loved playing poker with his friends and family, playing Magic the Gathering, Risk, Cribbage, and Monopoly. He loved anything medieval times such as wizards, dragons and swords and had a wide variety of collectables of all things medieval. He was a HUGE movie/tv buff, and some of his favorites were MASH, Top Gun, and Smokey and the Bandit, just to name a few. He is survived by his best friend and wife of nineteen years, Krysn Acre, his “fur baby” Candie, his best friend Mike (Katie Evan) Shaw, his parents Michael Lee Acre, and Sally Pence Acre, and Lisa Scovoronski. Siblings; Sarah (Justin) Schuler, Melissa Acre, Matthew (Amanda) Acre, and Tony (Sara) Acre, stepsister and brother Ryla Hubbard and Rob Hubbard, nieces and nephews; Crystal Acre, Megan Acre, Emma Schuler, Hayden Schuler, Damien Schuler, and Wyatt Acre. Extended family; Normand (Colleen) Provost, Karen (Roy) Smith, Allen Reichle, William Reichle, Rachel (John) Davis, Jason (Chanel) Provost, and Janet (Dave) Charron as well as his nanas and many aunts, uncles, cousins, and many friends. Also, his special mentor who encouraged Mike to believe in himself, Brian Taylor. Mikey was preceded in death by grandparents Roy Acre, Peggy Glasgow, Carol (Bob) Pence, Uncle Robert Pence, and stepmom Pat Acre. We are grateful for the time we had with Mikey and blessed to have had him for forty glorious years. He will be greatly missed by so many. He had the biggest heart and loving soul. We love you Mikey.