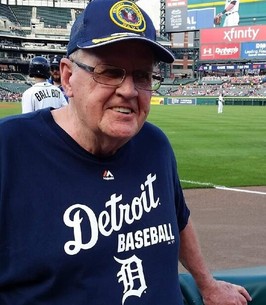 Lawrence Ray Pence – Age 85 of Lake, MI passed away at his home under hospice care on January 9, 2022, surrounded by his loved ones. Lawrence (Larry) was born in Warren, MI to parents James and Mary (Runyan) Pence on March 24, 1936. He married Alice Marie Hardy on April 29, 1960. Larry joined the US Navy and served his country honorably, after which he took a job with the Warren Fire Department, where he eventually served as Fire Chief. Larry stayed with the Warren FD for 31 years until his retirement. He enjoyed hunting and was a member of the Lake Rod and Gun Club. Most of all he enjoyed being a grandpa to his many grand and great-grandchildren.
Larry is survived by his wife of 61 years, Alice Pence, his daughter, Judy (Bob) Childress-Lewis, grandchildren Dawn Childress, Dawn (Jim) Beattie, Ron (Kari) Childress, Lisa (Jason) Markel, and great grandchildren Eric, Kaitlyn, Greta, Urijah, Alice, a sister Thelma (Dick) Mason, as well as many nephews and nieces.
He was preceded in death by his parents, Mary and James Pence, and his sisters, Beatrice (Bob) Scott and Louise (Dale) Day.
A service for Mr. Pence will be held on Monday, January 17, 2022, at the Campbell Stocking Funeral Home in Farwell at 11:00 AM. Pastor Richard Fairfield of the Abundant Life Apostolic Church of Sanford will officiate. Visitation will be held the evening before at the funeral home on Sunday, January 16, 2022, from 3:00 until 7:00 PM. Larry will be laid to rest in Cherry Grove Cemetery in Clare, MI. Memorial considerations may be made to the Garfield Township Fire Department, PO Box 390, Lake, MI 48632. Envelopes will be made available at the funeral home. Please share your memories and condolences with Larry’s family online at www.CampbellStocking.com.