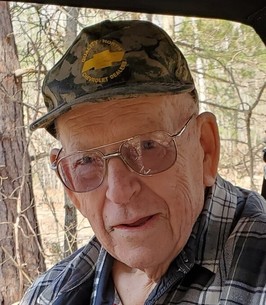 Jay G. Kinsey- age 88 passed away at his home surrounded by his loving family on Monday, November 15, 2021. Jay was born on February 10, 1933, to parents Roy Ennis and Audrey (Guy) Kinsey in Clare, MI. Jay proudly served his country with the United States Army from April 1953 until February 1955 and received a National Defense Service Medal for his service. Jay was married on June 6, 1953, to Shirley Nadine Shear and together raised their family of four. Jay worked for and retired after 33years from Kraft Foods. Jay had a passion for children and had a lifetime mission of shopping for children, buying gifts, and candy, etc. and loved throwing parties and organizing parties. He was an avid hunter, and fisherman, loved to camp, and cut wood. He could always be found outdoors tinkering with something. He passionately loved his family and grandchildren. Jay will be dearly missed by his wife of 68 years, Shirley, his children; Jay A. Kinsey and wife Jodi of Alb, New Mexico, Gary L. Kinsey and wife Linda of Waterford, Vicki Pulcifer and husband Donald of Kokomo, IN, Patricia Sexton and Jim Salisbury of Farwell, grandchildren Jayson, Jared, Sara, Jeremy, Taylor, Brent, Jennifer, and Amanda, eighteen great-grandchildren, and brother Clark Kinsey and wife Charlotte of Rapid City. He was preceded in death by his parents. A funeral honoring Jay is planned for Tuesday, November 23rd at 11AM at the Campbell Stocking Funeral Home in Farwell. Dr Steve C. Packer will officiate. Family and friends may visit with Jay’s family on Monday, November 22nd from 4 to 8PM. Jay will be laid to rest in Surrey Township Cemetery with Military Honors conducted by the Farwell American Legion Post # 558. Please consider Memorial donations to the American Heart Association and Munson Healthcare Hospice. Memorial envelopes will be made available at the Funeral Home. Memories and condolences may be shared online at www.CampbellStocking.com