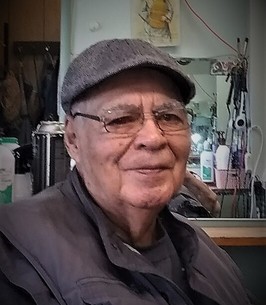 Eulalio Leyva – Age 92 of Farwell, passed away at home under hospice care surrounded by his loving wife on Monday, August 8, 2022. Eulalio was born to parents Francisco and Victoria (Torres) Leyva in Ganado, TX on May 16, 1930. He earned his engineering degree while working with Fisher Body, and stayed in engineering, working as a quality control engineer for General Dynamics until his retirement. He met Paula Jeanette McGaughy at Pampa Lanes Bowling Alley in Sterling Heights, and they were married on October 7, 2002 at the courthouse in Manistee, MI. Eulalio was fluent in many languages. He played saxophone in a band in Clarkston, MI, and when he was no longer able to play the saxophone, he learned to play the flute, and then taught himself to play the keyboard. He was a member of the Lion’s Club in Kaleva and used to wake up at 4:00 AM on Thursday mornings to make Finnish pasties for their food sales. He also enjoyed fishing and spending time with his grandchildren.
Eulalio is survived by his wife of 20 years, Paula, his children, Gail Leyva, Denise Leyva, Dan Leyva (Kim), David Leyva, Lenny Johnson, Johnny Johnson, Lori Johnson Hannigan, and daughter in law, Rebecca, grandchildren Dallas, Danny, Dillon, Randy, Katelynn, Joseph, Justin, Christa, Johnny, Jason, Kyla, Miranda, Ashley and Jacob, his very close great grandson, Elijah, brother Aurelio Leyva and sisters Lenora Leyva (Wilson), and Minerva Leyva.
He was preceded in death by a son, Richard Leyva, his parents, Francisco and Victoria, great granddaughter, Melissa, brothers Merced, Francisco, and Leonard, and sisters Santos, Adelina, and Engracia.
A funeral service will be held at Campbell Funeral Home in Farwell on Friday, August 12 at 1:00 PM. Chaplain Lonnie Severance will officiate. Visitation will be held from 11:00 AM until the time of service at 1:00 PM. He will be laid to rest following the service in Surrey Township Cemetery. Memorial Considerations are being accepted for Michigan Parkinson Foundation. Envelopes will be made available at the funeral home. Please share your memories and condolences with Eulalio’s family online at www.Campbell-fh.com.